Actually, being practical first allows for being fancy more quickly, and better manages my resources to distribute accordingly. Basically, if things go how I hope they will, I should have everything, including dining hall plumbing, smoothed and engraved (especially before the water melts and starts flowing) by next post.

Considering water pressures and general setup, including the diagonal pressure regulation, I should still be able to take advantage of what plumbing I will have setup and feed more places with fresh water.

This is the floorplan/flowchart I have the fortress modeled after: 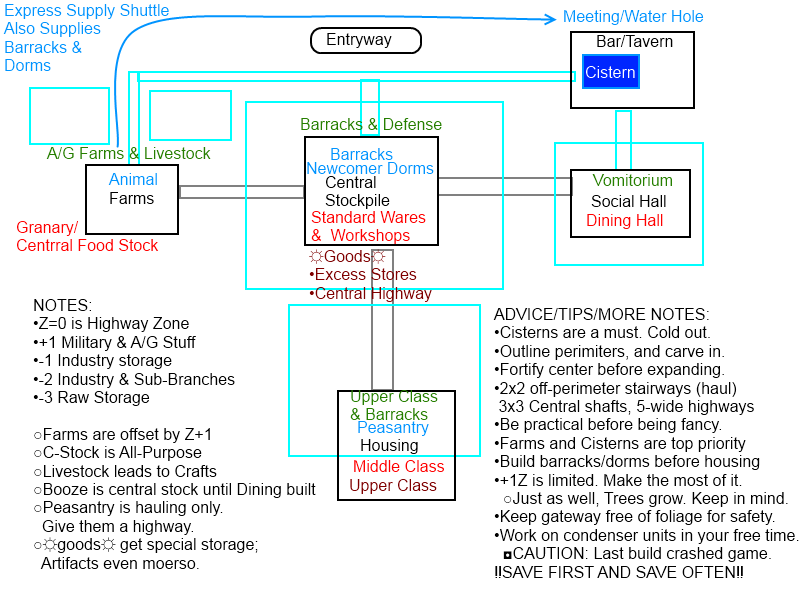 For some apparent reason, I forgot level 38 (actual wagon/dwarf level). Nonetheless, this is still a good sample.

To any previous fans of the Bloodfist: Good News!

I am in the works of setting the plans up for the next addition to the Blood-Class airships, the Bloodaxe.

All I can say about it is that this thing is huge. Up to twice the size of the Bloodfist (BF had 4 decks, BA has 8 decks, and is slightly longer and wider, while at it), and better designed overall. The Bloodaxe does what, in hindsight, I wish I did with the Bloodfist. Naturally, the Bloodaxe, due to it's scale, will take a considerable amount of time. However, I might do something similar with this, except maybe make it a community fort kind of thing.

The building process will still be similar (standard shipwright procedure (Skeleton, Hull, and then Internals), but the updates will be less frequent. Instead of seasonal, it will be every half-year to whole year update chunks. This would also be due to my improved playing ability, and a better selection of where to build it, and how to defend it.

Besides the references here, here's a better reminder of how I still intend to build it, just like this one:
http://youtu.be/obgkyS9ZvLc

I hope to be able to get started on it as soon as the week after Easter.

I didn't notice it until now, but the first floor of Vault-221 looks like a grenade.

I think flying the ship around the back of this thing (where it seems to have a defensive blind spot) and knocking out the engines with the (grappling/docking/tow) ballistae ought to drop it out of the sky.

Unlike my ship, I don't think the Star Destroyer has a redundant engine system, and a dual-bridge in case one gets incapacitated; plus, the bigger they are (and denser the material), the harder they fall. :P

EDIT:
Oh right, my ship also has tons of room all over the place, and the ability to add outriggers to fit even more ballistae/catapults on board. If all else fails, more dakka. Oh yeah, and the Chenjesu computer(s) is/are also possessed by 350 angry dwarven ghosts, so hacking (apart) the ISD's computer should be rather simple as well.

Plus, wait until I develop it's successor Bloodaxe, then you'll be in for a treat. Here's a hint; one weapon involves magma, and another weapon involves flying in at ramming speed.

I think my ship can take it on.

As the new releases of Minecraft keep on coming out, I will be updating the schematic in my free time. I'll still have the original package available for download, but the recent updates will include some improvements to the overall design that didn't translate well enough initially. So, for example, the crew quarters will have proper beds that you can sleep in, certain pieces of scenery will look more how they should (props, emblems), and when pistons are released as well, I'll even try to make some mechanism connectors which should explain how the boilers can connect. I don't have a release date set, since this will be done in my free time, but for the continuing support, I feel I might as well make an update to keep up.

While working on the improvements, I'll be thinking of what else I'll include in the Bloodaxe, the Successor to the Bloodfist. Bigger, faster, stronger, better.

Provided the next updates go how I think they will, I might begin working on it when .26-.28 releases (depending on new bugs unleashed, and when I get the blueprints ready).

There are potential plans for a successor to the Bloodfist to be produced eventually.

Oh yeah, and it'll be made in the more recent versions of DF as well, for added challenge, since I'm not as familiar with it yet. So it'll have the same amount of fun as this one had in production.

I also have this a an MCEdit schematic if you want it imported into Minecraft.

As of now, the schematic has been downloaded more than 1500 times.

::shrug:: I guess I didn't need this space after all!