This is likely to be the final snapshot of Wasprag, as there are no further projects to complete, and the framerate has degraded to the point that running with temperature on is consistently below 20fps - not as bad as Towerclouted, but still quite sluggish.

The automated obsidian factory was a huge success, producing a batch of obsidian using a single lever (though the second pull on said lever had to be done separately, as simply issuing two Pull the Lever tasks in a row causes the hatches to open and close so quickly that the water never has a chance to fall down).

I am now in search of a new location. Perhaps an aquifer would provide appropriate challenge, or possibly a sufficiently Evil region?

A final snapshot of Wasprag from outside, showcasing the Pyramid (now in blue), the Battlements and Execution Tower, and the Shrine to the Elf Leather Harp: 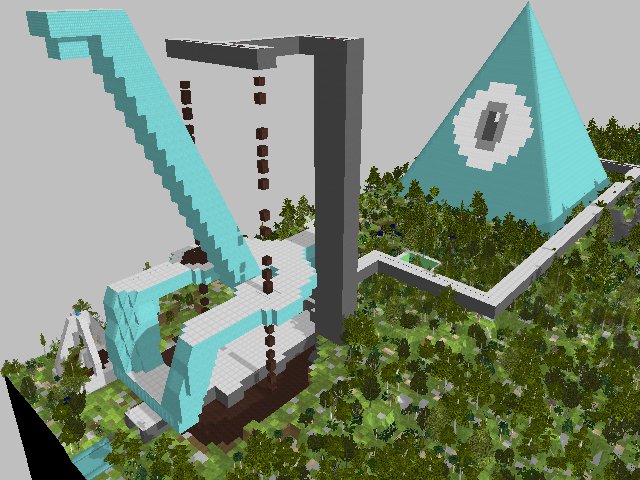 Simply pull this lever twice (with a sufficient delay between the first and second pull, but quickly enough that it happens before the cycle is finished) and a batch of obsidian will be produced in the chamber to the left with no intervention required. The 4 other levels can still be used for manual operation.

The machinery itself can be found up and to the right, as well as 5 Z-levels down, at the bottom floor. - Quietust

Holy crap thats cool. How are you gonna get all that magma there? construct a big pumping tower?

Needs more points of interest!
Holy-crap that pyramid is awesome.

That's a fantastic fortress. Do the fortifications in the tower cap farm actually drain water?

Absolutely - in fact, that's exactly why I built them.

Sweet jesus this is epic.

Don't have Flash?
You can download the compressed map file: 2009-11/quietust-Wasprag-ecamoewe-75-3824.fdf-map but you will need the .NET version of SL's DF Map Compressor to convert to the .PNG image format.