Slow progress, but progress I guess. After the major and several high-ranking traders were imprisoned for breaking numerous export agreements, more stone building was requested by the fortress planners to keep the population from going insane from boredom.

The first bedroom complex, holding about 40 people was built this last year, as well as the Large Magma Collider, which sprung a leak and has been temporarily shut-down until deemed safe for maintenance. Meanwhile, three batches of obsidian were produced in the new safe and friendly obsidian factory, meaning there might be enough stone blocks to finish off some of the current constructions and start new work over and above the pit.

Looking forward to seeing what you do with it, hopefully you post some updates ^^ (*cough* anvilchucked *cough*)

i'd love to see how this all ended out, if'n you didn't abandon on account of that water accident-in-waiting ;)

Noble Digger, I've flooded many forts before, and will try to avoid chaos here... I was planning on putting a 6 depth water pressure plate to seal off the pumps when the pond of thrift was about filled up. The water should flow down valley back into the stream if all goes wrong, and not into my fort... reasonably safe plan me thinks.

Interesting map, can't wait to see more. If you don't mind me asking, what tile set is that? I've been looking for a square one, and this looks great.

Hi Razin, its the Dorten tileset from the wiki page.

I lurve me some awesome stylistic forts.

You are a simply amazing designer, in the poetic sense.

Love the shape of the nobles quarters. With your tileset it looks really nice !

Very cool. I like the idea of a big solid keep half-buried into the face of the mountain. And what a starting location! The pastures on top of the mesa would be great for fenced-in farming... I bet you could even build a bridge out of green glass and have a greenhouse set into that hillock in the NW corner. Not that you need any more food!

No sand for glass on this map, just "sandy loam", the glass collectors didn't like it I don't think.

My next project is to build a defensive tower over and around the top of the pit, and then start throwing things away once there's a path from the main fort over there. Might do an arched walkway type thing and have a path below it down from the south hill to the river valley.

Fenced in farming, that's given me some ideas. A couple of guard towers, two or three maybe, in an arc around the magma pit, with a curving wall between fencing off a large area of strawberry farms... mhmmm, strawberry wine.

I love your magma forge area, and the magma sewer. I'm glad you stuck with this fort.

Mein Godt. The tileset is so elegant it's making me reconsider DFG. Is it all your stuff, Markavian? The way the walls work is amazing.

There's more to come... last time I played I started hollowing out the space above the pit to create an open cylinder, and I've dug a new set of storerooms beneath the fort to east of the noble quarters.

I just love this fortress, its so warm and cute, haha. What colorsheme is it btw?

I'm really glad this place is still kickin'. I remember predicting its watery demise ages ago!

This place just looks amazing, not to mention it's probably 10x more functional than my fort atm. Keep this going, man, you're bound to get some interesting adventures out of it.

Ack, this is just too well done. It's built normally but it turned into this masterpiece. Maybe it's getting tedious to keep going, but know that your work is still impressing people. Top of the crater 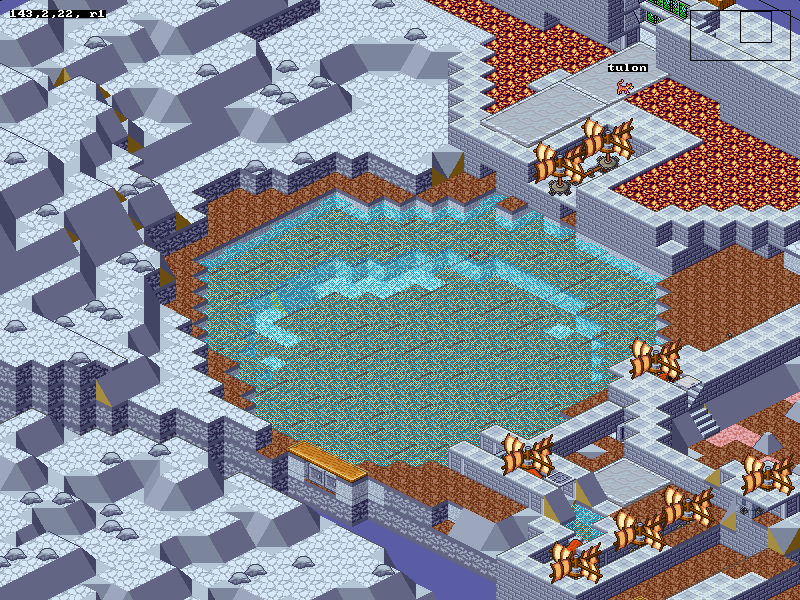 Don't have Flash?
You can download the compressed map file: 2009-04/markavian-Ultragear-nir_gomath-309-0.fdf-map but you will need the .NET version of SL's DF Map Compressor to convert to the .PNG image format.